What is the Leader-Mind Equation?

One of my clients who had not yet had the opportunity to read 'The Leader-Mind Equation' asked me: "What is this 'equation' you refer to?" This is the short answer!

The Leader-Mind Equation is a simple formula intended to help those with leadership responsibility to focus on what matters in leadership: 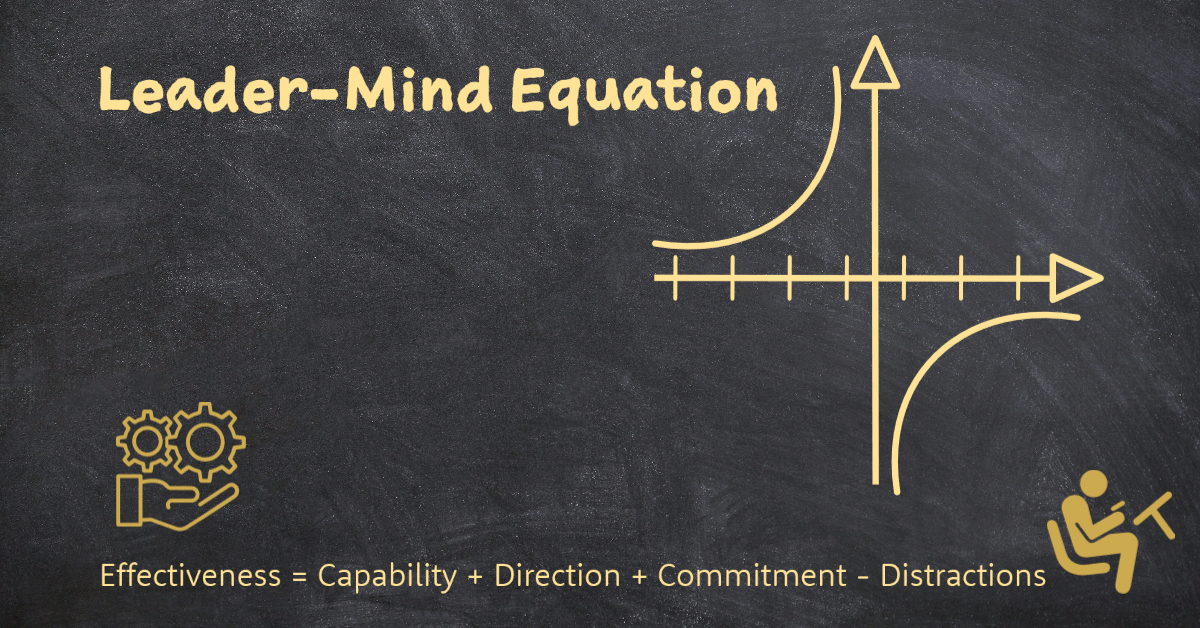 This formula make sense when we begin by defining effectiveness in leadership:

1 A successful leader will capably apply learnable skills to influence and enhance the behaviours, capacity and commitment of the people they lead.1

2 This leadership influence will make a positive difference to the success or performance of the team, organisation or enterprise which the leader heads.

In other words, the effective leader helps others to optimise and direct their capacity and commitment in order that the organisation will thrive.

Referring to the effectiveness formula will help us to keep the focus on what, as leaders, we need to do to succeed.

The formula applies both to the leader and to the people whom he or she leads:

Each of these statements supports the others. When a leader is intent on effectiveness, staff capability is deliberately grown; the priorities and philosophy of the organisation are apparent to all; and trivia and 'busywork' are not allowed to detract from performance.

A few years ago, I was talking with a group of middle level leaders about the 'Leader-Mind Equation'. In particular we were considering a question one of them had asked about the relative importance of the three positive variables (Capability + Direction + Commitment). One member of the group had a lot to say.

Daniel is a former AFL player who played at close to the highest level of the game. His perspective was very clear: "Look at it as if we were talking about developing an effective football team" he said.

Capability is the skill variable; no one can perform at a high level unless they can show skill under pressure. Success is impossible without capability.

Direction is about knowing where to put your effort - how the game works and where to direct your energy to make the most difference. It's game 'nous'. It's knowing the team's plan and your part in it.

Commitment is the motivation variable. It's the effort, energy, the 'run until you drop and then keep on running' factor.

We were listening! His metaphor seemed to work.

"The thing is", Daniel continued, "there is no point in asking which is most important out of capability, direction and commitment. No team or individual can succeed without all three. All the knowledge and effort in the world will come to nothing without skill. A player with skill and experience but who contributes less than 100% is going to let you down. A player with individual skill who tries incredibly hard but has no game nous will not be in the right position when it counts. In leadership and in sport", he continued, "all three are needed if individuals are going to be effective and the team is going to be successful."

The group thought about this for a while, and then one of the other members of the training group observed: "They are all inter-dependent really. If commitment grows, then individuals will willingly learn new skills and be more focused on the goals of the business, and so on."

1 I have adapted the definition of Leadership Capability that I learned from Dr Malcolm Davies, CEO of 'Learning at Work' (Brisbane). In his article Unlocking the Value of Exceptional Personalities" he defines leadership as: The capable use of a set of learnable skills to influence oneself and others, to set aside purely personal interests to contribute to the achievement of group goals." The article is included in a collection by Robert. E. Kaiser: The Perils of Accentuating the Positive, 2009.